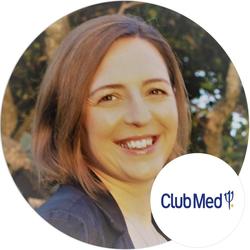 Christelle Ramen is an experienced financial executive with 20 years of experience in both the travel industry and project management.

Christelle joined Club Mediterranée in 2001 as an Assistant Financial Manager in Club Med European resorts, where she was later promoted to Financial Manager. In 2012, she became the Business Controller for 19 resorts in France, Italy and Switzerland. In 2017, she was promoted to Accounting and Business Control Director for the regions of Africa, the Middle East and Mauritius, based in Morrocco. In this position, she oversaw the accounting, tax, and treasury departments for our resorts in six different countries.

In September 2019, Christelle was appointed Chief Financial Officer for North America. She leads the accounting, controlling, tax, purchasing, and IT departments for four regional offices and nine resorts.

Christelle grew up and studied in France, with international experiences in South Africa and Germany. She speaks French, English and German. She now lives in Miami, Florida, where she enjoys an active lifestyle with her husband and their son.

Finance and Accounting Transformation: Turning a crisis into an opportunity